How history has forged the path to a circular economy

Changing our view of the world for a more prosperous future

Put simply, the circular economy is a way of designing, making, and using things within the limits of the planet. And yet for anyone truly engaged in the topic there is something intriguing about it, a sense that, behind this simple idea, there is a far richer story.

In the pre-science worldview, our understanding of the universe came about primarily through observation of our natural surroundings coupled with intuition and religious precepts. We had no reliable frameworks or theories for guidance. The constants that guided life were the divine entities embodied in the sun, moon, stars, and seasons. Religion not science explained how the world worked: in essence, that humanity was at the mercy of the Gods whose heavenly will was reflected on Earth.

The best we could do was to be in accord with these powerful forces and hope that through ‘correct’ action the Gods would look favourably upon us. This conception of the world can be seen in the myriad elements of ritual and sacrifice common to early polytheistic cultures. Human sacrifice, as a means of appeasing the Gods in the hope of a good harvest or good hunting, for example, was common to the ancient Egyptians and the Aztecs.

The spiritual world was all important because it was seen as indivisible from the physical world; even to the point that man’s creative inspiration came from Gods or muses. The word ‘inspiration’ stems from the latin ‘inspirare’ (‘to breathe or blow into’) which came to be used in early forms of written English in the figurative sense of being ‘moved by divine guidance’.

Scientific worldview of the enlightenment

Between the 14th and 17th Centuries, the cultural movements of the Renaissance and Humanism gathered momentum, laying the seeds of a new worldview that would grow to maturity around the time of the Enlightenment (17th and 18th Century Europe). German philosopher, Immanuel Kant, summed up this era in the following terms: “Dare to know! Have courage to use your own reason!”

This was a period marked by radical changes in perspective and ideals, culminating in a fervent belief in the power of the rational mind to transform humanity. The result was a number of important inventions, books, essays, discoveries, laws, and two significant revolutions: The American Revolution (1775–1783) and the French Revolution (1789–1799).

One of the era’s most significant breakthroughs was Isaac Newton’s ‘Philosophiae Naturalis Principia Mathematica’ (Mathematical Principles of Natural Philosophy) published in 1687. In it, Newton set down the three laws of motion and the law of universal gravity that would become the building blocks of modern physics.

During this time of discovery, science took centre stage leading to a new worldview that would eclipse the old. Humanity was no longer positioned at the fringes of the universe, helpless and at the mercy of the Gods, but instead placed at the centre of it, able to measure and quantify the physical world and understand its laws through careful analysis.

Ultimately, this gave rise to the three pillars of the scientific worldview that continues to dominate our thinking to this day: understand, predict, and control. The underlying metaphor in this worldview is the universe as machine or mechanism. From this perspective, the universe is a clockwork system of interlocking parts that follow a basic set of laws. It is logical, measurable, and predictable because it operates on mathematical principles of cause and effect.

Pierre Simon Laplace (1749 -1827) captured this notion clearly in his work A Philosophical Essay on Probabilities when he wrote: “We may regard the present state of the universe as the effect of the past and the cause of the future. An intellect which at any given moment knew all of the forces that animate nature and the mutual positions of the beings that compose it, if this intellect were vast enough to submit the data to analysis, could condense into a single formula the movement of the greatest bodies of the universe and that of the lightest atom; for such an intellect nothing could be uncertain and the future just like the past would be present before its eyes.”

Interestingly, faith in God was still very much alive (Newton wrote more about alchemy and the Bible than he did about science) but the physical and spiritual worlds became separated where once they had been indivisible.

In western civilisation, this underlying assumption about the universe (as a machine) has permeated all spheres of life — social, cultural, and scientific. And it has, of course, furnished us with the scientific method of reductionism: understanding the whole through analysis of the parts.

The Father of Modern Philosophy, Rene Descartes, described the reductionist method perfectly in his 1637 publication A Discourse on the Method: “To divide all the difficulties under examination into as many parts as possible, and as many as were required to solve them in the best way…to conduct my thoughts in a given order, beginning with the simplest and most easily understood objects, and gradually ascending, as it were step by step, to the knowledge of the most complex.”

We have become so adept at using this method, which is now so ingrained in western thinking and education, that we now use it unconsciously in our approach to all manner of problems. This is useful for dealing with problems rooted in linear cause and effect such as how to fix an engine, but potentially harmful when applied to highly complex and dynamic problems such as how to tackle climate change.

The emerging worldview of the digital age

Science has explored the microcosmos and the macrocosmos; we have a good sense of the lay of the land. The great unexplored frontier is complexity.

With the arrival of the digital age and the power to compute unprecedented amounts of data, came new insights that cast doubt on the certainties of a deterministic scientific worldview. Progressively, the scientific pillars of understanding, prediction, and control began to erode. New discoveries would prove that the universe is dynamic and nonlinear, full of interdependence and feedback. We can observe and come to recognise certain patterns, but we cannot predict or control the outcomes.

Human beings have understood this intuitively for Millennia. After all, it was Aristotle who said: “The whole is greater than the sum of its parts.” But until very recently we have lacked the tools to make sense of this complexity. Now that we have those tools, we are witnessing the emergence of a new type of science known as Complexity Science (the study of complex systems). Complexity examines the nature of the relationships that exist in complex phenomena, how elements combine to produce an effect on the whole that is supremely greater than the capabilities of those individual elements. In order to have any kind of grasp on complex systems, proponents argue that we need to break out of the confines of linear reductionist thinking and start thinking in systems.

In her book, Complexity: A Guided Tour, Melanie Mitchell writes of complex systems: “No-one knows exactly how any community of social organisms — ants, termites, humans — come together to collectively build the elaborate structures that increase the survival probability of the community as a whole. Similarly mysterious is how the intricate machinery of the immune system fights disease; how a group of cells organises itself to be an eye or a brain; how independent members of an economy, each working chiefly for its own gain, produce complex but structured global markets; or, most mysteriously, how phenomena we call ‘intelligence’ and ‘consciousness’ emerge from nonintelligent, nonconscious material substrates.”

So what is the universe like if not like a machine? Science is now showing us that a better metaphor is one more rooted in living systems: as something alive, in flux rather than stasis, adapting and evolving in response to feedback in infinite, unpredictable ways; more akin to a murmuration of starlings than a series of cogs whirring in a clock. This is important. As cognitive linguist George Lakoff reminds us: “metaphors are capable of creating new understandings and, therefore, new realities.” Of course, we don’t all share the same reality: indigenous peoples the world over have long identified with this conception of the universe as a living, breathing entity. Where the western mind sees a world of inert things, the indigenous mind sees a world of process and relationship.

While this shift, heralded by new scientific discoveries, might be underway, we should be careful not to do away with the mechanistic mindset altogether — it has, after all, helped humanity enormously. The Industrial Revolution was built on such principles and helped lift millions out of poverty into prosperity. The great thinkers of the future are likely to be those that can pick and choose perspectives and approaches (reductionist and systems) and apply them in their correct context, skilfully weaving the two, able to adopt a systems approach as intuitively as we now use the reductionist.

The below graphic captures the shifting focus from an educational standpoint as we approach a new way of understanding more fitting for the 21st Century. 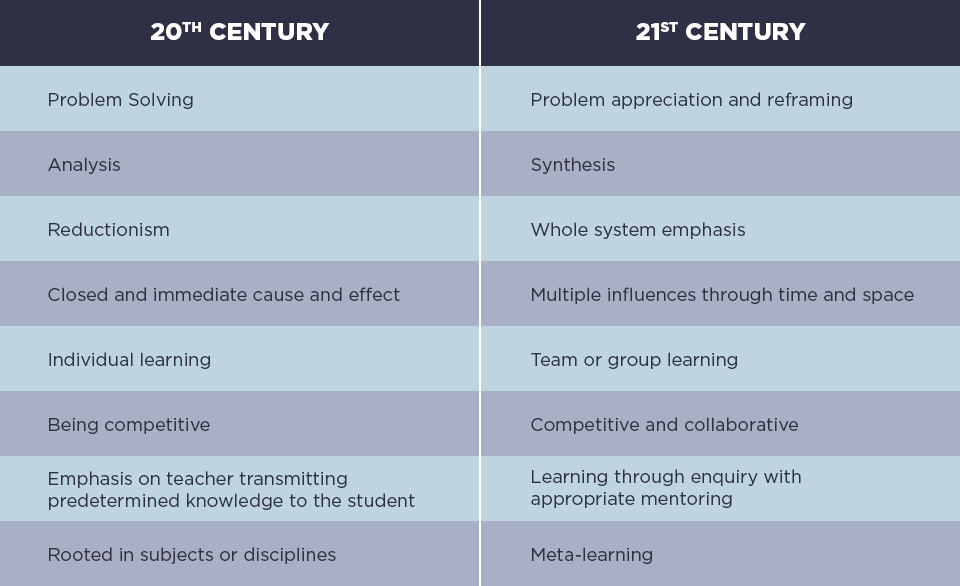 The circular economy, as an idea, is indicative of this greater shift at play. Inspired by the principles of nature, it is entirely consistent with notions of process and relationship, of flux and flow rather than stasis. With 4.6 billion years of evolutionary tinkering behind it, why would we look anywhere else for inspiration?

As circular economy pioneer Ken Webster points out in The Circular Economy: A Wealth of Flows, the circular economy is “about the possibilities of abundance, of meeting people’s needs by designing out waste, and recreating the kind of elegant abundance so evident in living systems.”

In many ways we are coming full-circle, with a new scientific understanding beginning to illuminate and reinforce aspects of our pre-science worldview, which, hopefully, will set us on a more harmonious path of living.

Seen in this context, the circular economy represents a lot more than just a clever way of using resources. The growing interest in the concept may be the outward sign of a deeper shift marking the beginning of a new and more prosperous future. If you want to deepen your knowledge of the circular economy, learn how to stay ahead of the game... What is the circular economy? 1/3

Who's doing it? And what are some of the best examples of it in action? How can the circular economy work for people?

The information technology revolution has only just begun, yet it is removing jobs faster than its...